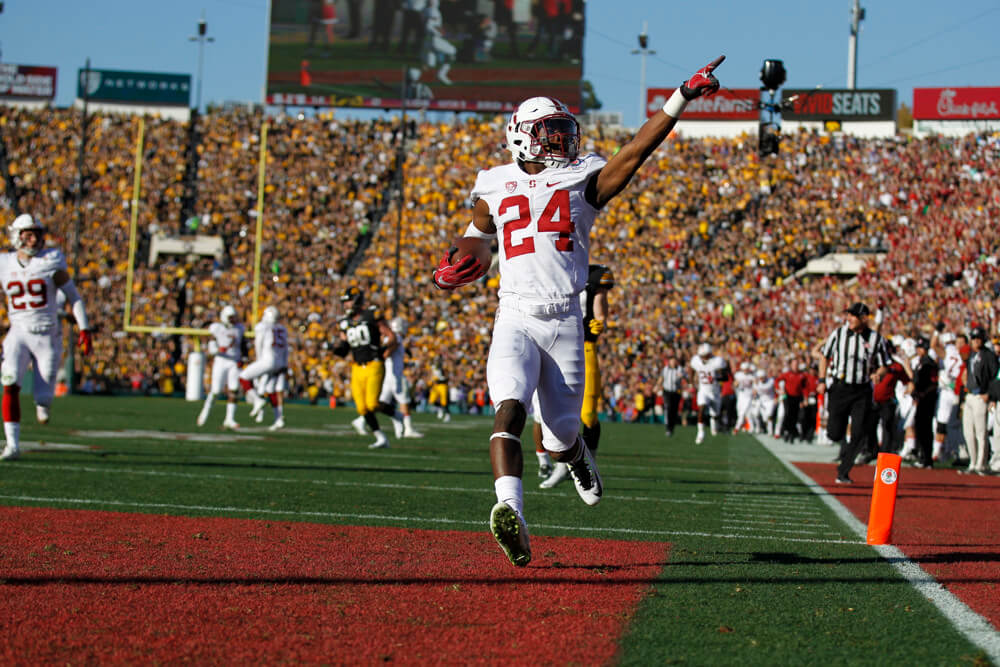 Stanford junior Quenton Meeks is one of the best cornerback prospects in the country, but he is not receiving the national hype that comes with the label. With five career interceptions, including two returned for touchdowns, it is no surprise that Meeks earned All-Pac 12 honors in his first two seasons for the Cardinal.

Even with this proven production as a feared playmaker in a power conference, Meeks is still flying under the radar. Top cornerback prospects for the potential 2018 NFL Draft class like Tarvarus McFadden, Jaire Alexander and Iman Marshall are considered to be in a tier of their own; but as I’ll explain throughout this piece, Quenton Meeks is just as good, if not better than any of these cornerbacks.

At 6’2, 204, Meeks possesses great length and a compact, muscular frame on the hoof, passing the eye test with ease. Whereas some long cornerbacks do not utilize their size to its potential, Meeks is able to stifle receivers at the LOS with aggressive, heavy hands.

On multiple occasions, he would lunge too far forward after engaging contact, allowing the receiver to gain leverage. Early in the season, this was evident as well as a lack of trust in his hand strength and length. He was able to improve this disruption as his sophomore season went on. Because he is only entering his third season, there is reason to believe he can be elite in this area with more snaps.

Meeks needs to use his hands at the LOS, but he recovers nicely, swiping the ball at the last second for the PBU. Didn't give up on play. pic.twitter.com/Z11IMtpfm1

Transitioning to how Quenton Meeks plays with his back to the ball in man coverage, he is as sound as they come. As this play in the opening game of the 2016 season against Kansas State shows, Meeks didn’t trust his hands at the LOS to get aggressive, as I explained earlier. However, he was able to recover and get back on the hip pocket, allowing himself to be in position to make a play on the ball. He finds the ball over the correct shoulder, but because of a perfectly thrown pass, Meeks had to thread a needle to disrupt the receiver at the catch point.

Too many cornerbacks, at all levels of competition, give up on a play a split-second too early. Meeks, however, sticks with the play and swipes the ball out of the receiver’s grasp at the last second. The result is an incomplete pass instead of a 20-yard gain. This was all because of Meeks’ patience and ball skills.

One of the most important notes I wrote during my evaluation of Quenton Meeks was that he knows how, when and where to attack the ball in the air. Whether it is finding the ball over the correct shoulder, timing his jump, or attacking the ball for either an interception or deflection, Meeks proves his fundamentals in man coverage time and time again.

As I’ve explained in my recent evaluations of MJ Stewart and Jordan Thomas, the ability to consistently play man coverage with your back to the ball is arguably the most important trait to a cornerback’s skill set. Meeks’ fundamentals are not only evident in this facet of the game, but also in Zone as well.

I can't explain enough how good of a play this is. Meeks is a student of the game. Patient, quick to switch, showcases his ball skills too. pic.twitter.com/L8NORqInXn

As the son of former Indianapolis Colts defensive coordinator Ron Meeks, it is no surprise that Quenton Meeks is a student of the game. He is a film junkie who is able to translate his football intelligence to the field.

On this post-wheel route combination against Kansas State, Meeks stays patient and does not overcommit, allowing himself to make a quick switch. Showcasing his incredible ball skills, as explained earlier, he high points the ball with strong hands and his 6’2 length. Looking at this play over, it is almost as if Meeks baited the quarterback into making this wheel throw. He had his line of vision focused on the hip pocket of the receiver running the post route. Through his peripheral though, he knew the wheel route was there as well.

It is this game of “cat and mouse” he plays with quarterbacks in Zone that makes him so special. In addition, his athletic ability to pull off a play where he can change direction and cover that much ground in a short amount of time to get the interception is especially rare for tall cornerbacks.

Dreadful throw by Kizer, but look at Meeks' click and close here. For a corner his size, the ability to play Off is so valuable. pic.twitter.com/2NLT4Oukir

As I just explained, bigger cornerbacks like Meeks usually struggle in off man coverage because of their lack of COD skills and stiff hips. However, Meeks plays with a patient pedal, reads both the receiver and the man, and then plants to attack with uncanny reactionary quickness. This is a result of his football intelligence and dedication to study. He knew the route before the Notre Dame receiver did. I mean, Meeks literally clicked and closed before the receiver planted his foot. If DeShone Kizer does not throw this ball into the dirt, it is probably a pick six.

Eye discipline is a common issue with cornerbacks at this level in that they are easily baited, but Meeks turns the tables and makes it a use for deception. He trusts his athleticism and reactionary quickness to encourage these throws by giving up a little separation before breaking on the ball.

Because Meeks is able to play Press, Off, or Zone at a consistently high level, he is not a scheme-specific cornerback as most players with his size are limited to. I simply cannot overstate the importance of this versatility.

Meeks baits Kizer, undercuts the WR for the pick six. I think he belongs in the first tier group of cornerbacks with McFadden and Jaire. pic.twitter.com/YPqowJzsz9

Other than possessing raw athleticism to change direction without giving up separation, route recognition is the most important trait to have while playing Off. This involves a combination of both eye discipline and reactionary quickness, both of which Meeks may be best at.

On this play, he is playing Press, but the same concept applies. Knowing he has help over the top, he has no problem undercutting the throw for a pick six. He recognizes the route and makes as quick a break as you’ll see towards the ball. A step too late, and the receiver might have made this catch if the throw was on point.

Every risk Meeks takes is calculated. With his ball skills, processing ability and athleticism, he is a feared playmaker that quarterbacks would be wise to avoid.

This is one heck of a tackle and wrap up by Quenton Meeks. Closing speed on display as well. pic.twitter.com/V1XvJIo45e

In addition to his advanced technique and discipline in coverage, he is also a fundamental run support player. Whether it is fulfilling his role as contain without playing “hero” ball, or just making a tackle in the open field like on this snap, Meeks is reliable. That is all I ask for at the cornerback position in the run game. His reactionary quickness and closing speed are again on display here, which puts him in prime position to tackle the ball carrier with a sound, well-timed wrap up in the hole.

Quenton Meeks is truly a student of the game, and I have no problem saying that he is one of the smartest and most intelligent cornerbacks I have ever scouted. Combine this football IQ with his length, play strength, ball skills and athleticism, Meeks is the complete package to play in any coverage scheme. Even then, Meeks still has room to grow with his technique at the LOS. If he plays more with his length in addition to mirroring with his feet in Press, he could be much more dangerous.

For my standard evaluation of cornerbacks, he checks off all of the boxes and then some. In fact, I believe he has as high of an upside as any draft-eligible cornerback. With that being said, Quenton Meeks unequivocally belongs in the top tier of 2018 cornerback prospects. The more I watch his tape, the more I think he is as good, if not better than both Jaire Alexander and Tarvarus McFadden.

Tuls is one of the lead NFL Draft analysts for Draftbreakdown.com and has been a key contributor to several other NFL Draft sites in recent years. At Draftbreakdown, Tuls provides macro-oriented NFL Draft coverage, including comprehensive player rankings, mock drafts and big boards for the site. Tuls has worked with some of the NDT Scouting staff previously before; he worked with National Scout Jon Ledyard to form the core of USA Today’s Draft Wire site for the 2016 NFL Draft season. His work there was centered around draft reports, with additional analysis and breaking news efforts as well.

Solak | Parallels between Equanimeous St Brown and AJ Green in Route Running
Crabbs | Dorance Armstrong and speed to power conversion
To Top
Notice: We use cookies to ensure that we give you the best experience on our website. By closing this banner, scrolling this page, clicking a link or continuing to browse otherwise, you agree to the use of cookies. If you want to know more or withdraw your consent to all or some of the cookies, please refer to the cookie policy.OkRead more