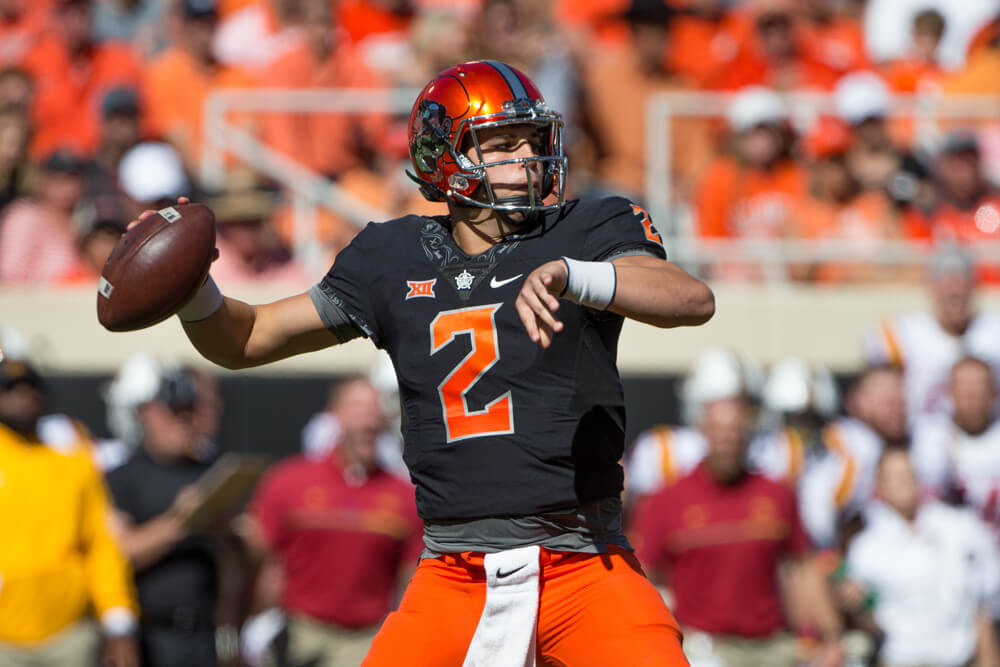 If you are yet unfamiliar with the Contextualized Quarterbacking (CQ) project, I recommend checking out my introductory thread on Twitter here. For a basic gist, here’s a segment from the original release of the CQ:

“The CQ uses charting data on all Draft-eligible quarterbacks to provide better lens through which to evaluate their production. By categorizing each passing attempt relative to factors like the quarterback’s throwing platform, the presence of pressure, and the target’s place in his progression, the CQ does not only show us how precise of a thrower any quarterback is, but also what factors greatest affect his precision.”

Previous installments of the CQ:

My process through Mason Rudolph’s evaluation is, to me, the greatest example of the CQ’s value. When I first watched Rudolph, purely for a film-oriented evaluation, I was not a fan. Dude could get the ball to his first read pretty decently and occasionally chuck up a prayer to James Washington. Not a big deal.

After charting all *squints* 474 of his chart-worthy passes, I grew a degree warmer on his game-but only just. Once the data precipitated, however, I found out that Rudolph has some sneaky success in areas I underestimated.

The CQ doesn’t replace evaluations-it helps provide lenses on certain contexts, which allows us to do two things. One: answer certain questions. Two: go back to the tape with new questions in mind. It provides depth, layers; it challenges our heuristic eye. That’s what it did, at least, for me and my Rudolph evaluation. Here’s what I found out. 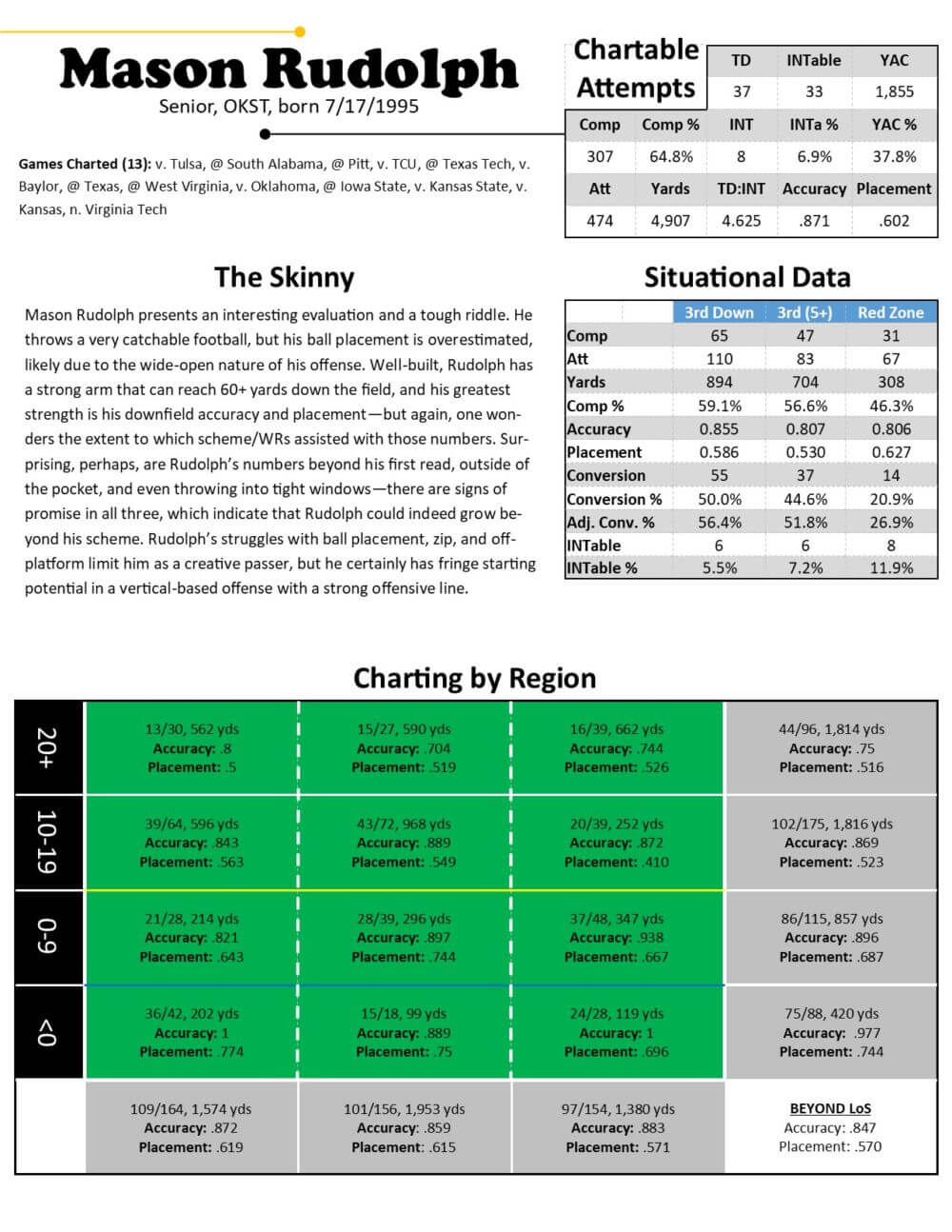 The first thing we learn is this: Mason Rudolph does not have great ball placement. Were you listening to broadcasts-always a dangerous proposition-or some big-media scouts, you would think he did. He delivers a catchable football (.847 accuracy score beyond line of scrimmage), certainly-but a .570 placement score (beyond LoS) is bottom tier for all of the Senior Bowl QBs.

This, to me, is an example of the first function served: answering a question. When watching Rudolph tape, an evaluator inevitable wonders: “How often do these awesome, catch-radius monster WRs in James Washington and Marcell Ateman bail out Mason Rudolph?” And the answer, as we can determine by Rudolph’s weak placement score but competitive completion %, is “Oh. A lot.”

But we notice another thing with Rudolph: his accuracy and placement both don’t experience a steep drop-off as you travel further down the field. His downfield accuracy and placement actually score at the top tier of the Senior Bowl QBs. Plainly put: Rudolph is only a less accurate passer than his competition when throwing short of 10 yards. Beyond that, he’s competitive, if not leading.

Some of that has to do with Rudolph’s long arm. When he sees Cover 0/1 and knows he has James Washington on the boundary, he can just air that puppy out 40+ yards down the field and let Washington make him right. On some of those throws-often, the ones that stick in memory-Rudolph doesn’t throw a great ball, and Washington (or another OKST WR) is forced to adjust. It seems to the scout that Rudolph consistently underthrows his deep balls. But the fact of the matter is this: with a placement score above .500, Rudolph is not only throwing very catchable footballs down the field-more often than not, they’re well-placed as well.

This demonstrates the second function. Had I not undertaken the CQ, I would sit here telling you that I thought Rudolph had poor placement down the field. He still struggles with underthrows, yes-but overall, he places a good football deep. That’s excellent news for Rudolph’s pro projection.

Rudolph’s poor conversion percentage in the red zone interests me. But that’s another conversation for another day. 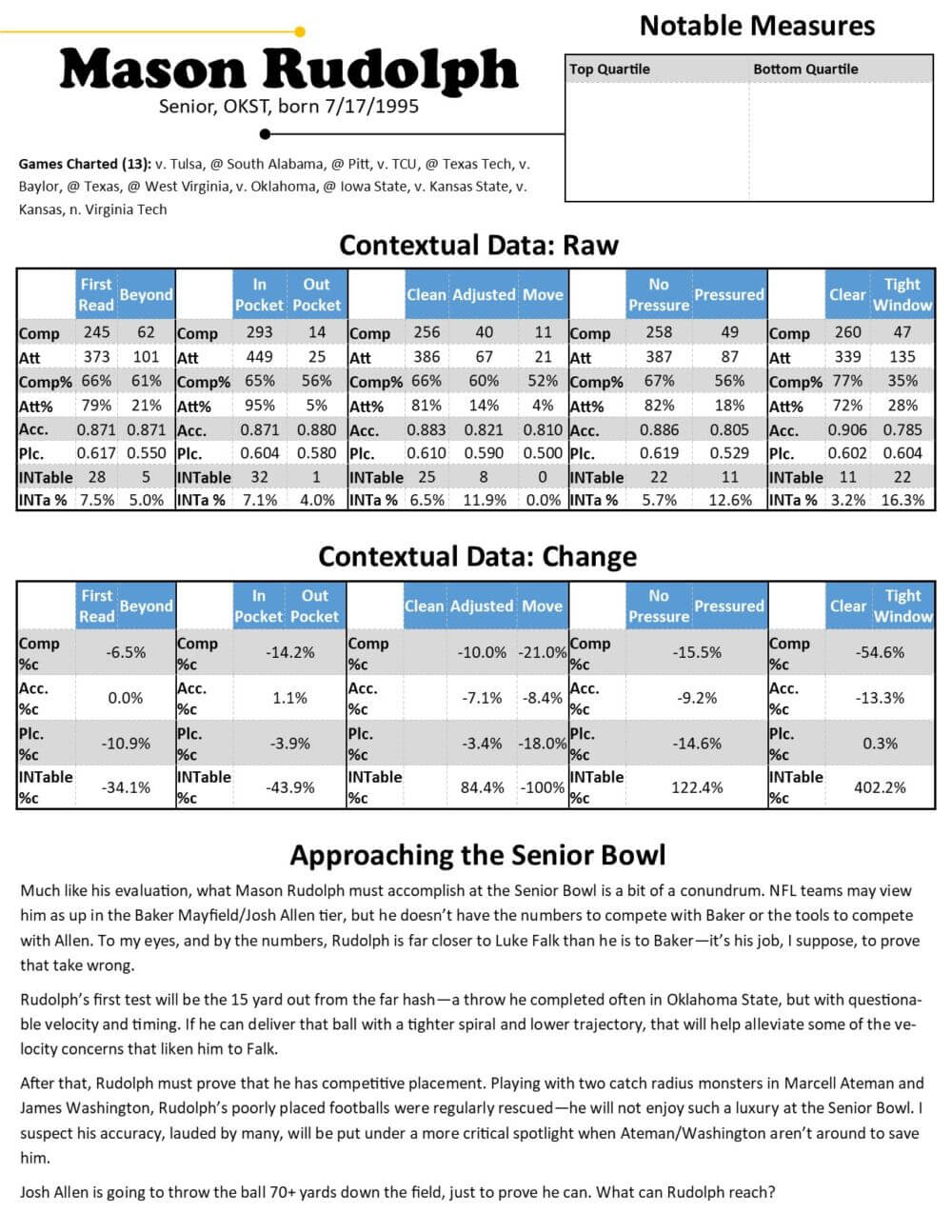 If someone tells you that Mason Rudolph can’t work beyond his first read, calmly inform them that they are mistaken.

Rudolph’s success beyond his first read answers another big question regarding his game. While Rudolph does struggle to remain calm when moving to his secondary and tertiary reads (leads to poor placement), he delivers as consistently catchable a football. He even sees a drop in INTable passes, which speaks to how he has enough processing ability to make decisions beyond robotically feeding his first read, which gets him in the most trouble when it comes to interceptable balls. I can comfortably say that Rudolph-with coaching-can operate a multi-read offense successfully.

Against pressure, Rudolph suffers. This is, I suppose, expected: he doesn’t have great athleticism and hates throwing on the move, so escapability is a question; he loves his first read, and will stay tethered to it for too long. The high uptick in INTable passes under pressure and into tight windows (400% increase?!) both stand out, as they indicate to me how Mike Gundy’s wide open offense has instilled in Rudolph a fear of…uh…defenders. He will struggle adjusting to NFL speed, as he simply isn’t yet comfortable working with enemies in close quarters.

Another number stands out under the Tight Window context: -54.6% completion percentage?! That’s bonkers, especially when you consider his placement stayed steady and accuracy didn’t drop off terribly. There’s a story there, and it’s likely on the receiving end, as tight window throws often translate into contested catches for the intended recipient.

Again, the CQ helps formulate questions for the tape to answer.

Ben Solak has been a football fan and film junkie for all of his life, and has the pleasure of serving as a National Scout for NDT Scouting. He also covers the Philadelphia Eagles for Bleeding Green Nation and co-hosts the Locked On Eagles podcast. Ben takes many things far too seriously, including fishing, Captain America, grammar, and Game Of Thrones.

This site uses Akismet to reduce spam. Learn how your comment data is processed.