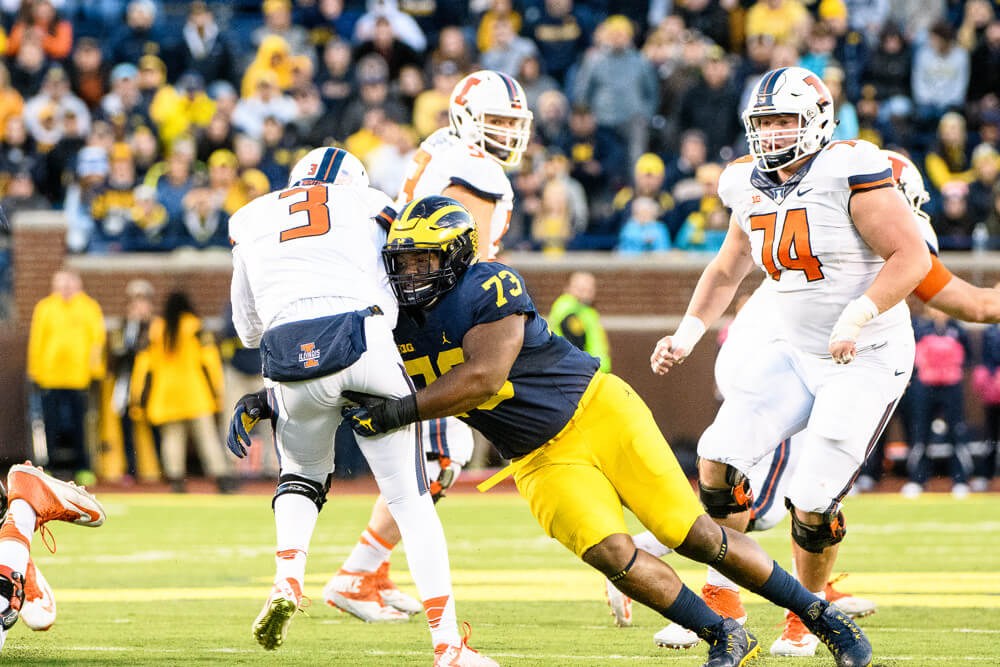 Michigan DL Maurice Hurst is that next interior defensive lineman that is undersized but incredibly quick, powerful and disruptive. Hurst lives in the opposing backfield with his get off, leverage and power.

All of these clips are brought to you by Krossover, NDT Scouting’s film partner for the 2018 NFL Draft season.

Hurst is one of the 99 seniors that Jon Ledyard, Kyle Crabbs and I are showcasing this summer as part of our NDT Scouting Premium services.

His full assessment is available but as with all of our works at NDT Scouting, we hope to continue to be transparent in our process.

Let’s examine what specific traits indicate how Hurst wins and why he’s able to be such a disruptive interior presence. The following clips/scouting notes highlight those areas.

When a defensive tackle prospect is listed at only 282 pounds (ideally 300ish), the initial concern is whether or not he can overcome size deficiencies and be able to remain stout when dealing with interior blockers. You can put those concerns to rest – Hurst knows how to maximize his frame by firing quickly off the ball, playing with great leverage and establishing his hands to control the rep.

Hurst compliments his technique, power and quickness with a motor that always runs hot. A backside 3-technique on this rep, Hurst refuses to let right tackle cross his face and immediately works laterally down the line of scrimmage. While Taco Charlton (No. 33) does a terrific job of setting the edge and maintaining outside leverage to force the run back inside, it’s not the play-side tackle or a linebacker that makes the tackle for loss – it’s Hurst that works into the boundary to make the play.

Today’s NFL running concepts are zone-heavy so having interior defensive lineman with this type of range is a major plus.

Backside 3-techniques don't normally make TFL's on boundary runs but here we are. Maurice Hurst is an animal. pic.twitter.com/fw9tMlWqx2

Hurst does a tremendous job of routinely playing through contact. He has a keen awareness to defending the run and understanding where the football is going based on how the blocker attacks him.

When lined up as a 3-technique and the guard releases to the second level and the right tackle tries to reach your inside shoulder to pin you inside then its obvious where the ball is designed to go. On this rep, Hurst does a tremendous job processing this action, refusing to get reached and working down the line of scrimmage to make the play. He’s in control throughout the rep and doesn’t allow the tackle to work him beyond his gap.

It’s a challenge for team’s to run at or around him. He is a complete run defender.

Maurice Hurst is outstanding at playing through blocks. Backside OT has no chance of crossing his face. Hurst doesn't give an inch. pic.twitter.com/7BReOOD7Hj

3rd and goal from the two yard line is where you find things out about lineman. Hurst blows up the guard and is nearly two yards in the backfield when the running back gets the football. The back is immediately dead to rights.

Notice how aggressive Hurst is but that he’s always under control. If you will recall UCLA DT Eddie Vanderdoes who was a third-round pick of the Raiders this year. Vanderdoes was quick off the ball, powerful and routinely penetrated the line of scrimmage. The problem was that it was often reckless and out of control, leading to misalignment in terms of run fits and created levels for the defense. That’s not the case with Hurst who plays with tremendous control and balance, even when over-powering blockers and getting into the backfield.

I already touched on Hurst’s motor but it’s how he pairs it with outstanding mental processing skills that make him such a dynamic football player.

If you sample Hurst’s film, you will routinely see him recognize screen plays and get to the football. This example is my favorite because it’s not in an obvious screen or draw situation, rather a 1st and 10.

Hurst knows how to properly attack his man but also read through the block and into the backfield. Penn State likes to get TE Mike Gesicki involved in the screen game and Hurst knows it. When he sees the combination of Gesicki working across the formation to position himself for the screen and how his blocker invites him to rush the passer, Hurst immediately takes a perfect angle to Gesicki for a textbook finish. Hurst’s play-recognition skills are tremendous.

Don't recall ever seeing a defensive lineman making so many tackles on screen plays but that's the type of motor you get from Maurice Hurst pic.twitter.com/Md6BvXsZG0

All of the traits that I’ve detailed in terms of power, quickness, hand technique, and mental processing show up when Hurst rushes the passer. Those elements are necessary to generate pressure but the best rushers are those that can turn the corner by having flexibility to change directions. If you’re wondering if Hurst has that – of course he does. On this rep, Hurst shows off how fluid he is and his ability to carry considerable speed when changing directions.

Check out the easy change of direction skills here from Maurice Hurst as he turns this angle to finish the sack. Impressive flexibility pic.twitter.com/m6v6m3MHbY

Listed at 6-foot-2 and 282-pounds, Hurst may be a small package but he’s the total package. Whether it’s defending inside run, outside run, working into space or rushing the passer, Hurst offers the skill set needed to eliminate plays.

Hurst wasn’t a full-time starter last season but still racked up 11.5 tackles for loss and 5 sacks. Assuming a more prominent role on the Wolverines defense this year, Hurst is primed for a monster season as he solidifies his status as one of the top defensive lineman available for the 2018 NFL Draft.

Crabbs | OT Connor Williams is worth the hype
Solak | Run Fits and Aggressiveness with Keishawn Bierria and Azeem Victor
To Top
Notice: We use cookies to ensure that we give you the best experience on our website. By closing this banner, scrolling this page, clicking a link or continuing to browse otherwise, you agree to the use of cookies. If you want to know more or withdraw your consent to all or some of the cookies, please refer to the cookie policy.OkRead more