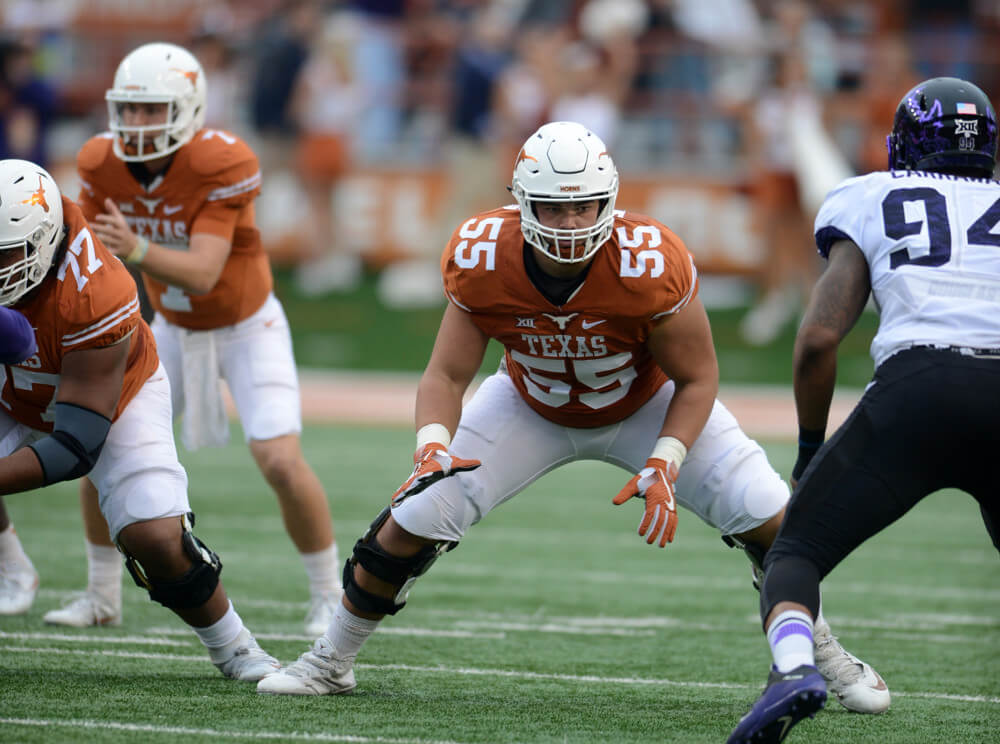 Merry Christmas, Happy New Year and welcome to the latest edition of 6-pack Thursday where I drop a half-dozen NFL Draft takes and nuggets for your reading pleasure on a weekly basis. Let’s crack this thing open.

Rosen and Darnold figure to be among the first five or ten selections next April and their recent comments promise to be over-analyzed.

UCLA QB Josh Rosen on getting drafted by certain teams, if he comes out this year: “I’d rather be a lower pick at the right team than a higher at the wrong team.”

Both are perfectly fine statements and don’t warrant over-analysis. And while NFL teams likely prefer Darnold’s statement, they definitively prefer Rosen’s ability to throw a football.

Prediction:  Rosen smooths things over once he hires an agent and meets the Cleveland brass and is ultimately selected No. 1 overall by the Browns.

Could Clelin Ferrell be selected over Bradley Chubb?

My latest 2018 Mock Draft was released on Christmas Day and many were perplexed that I had Clemson EDGE Clelin Ferrell getting drafted one spot higher than NC State EDGE Bradley Chubb. Slow your roll if you don’t think I like Chubb – I have him getting selected in the top five.

The reality is that I believe Ferrell has better physical traits that may lead to an earlier selection than Chubb. He is longer, more explosive and more flexible than Chubb who is more of a technician with outstanding power.

They are both excellent prospects but it’s not far-fetched to think Ferrell may ultimately get selected higher.

Out of 18 top-10 receivers drafted since 2005, arguably five or six have emerged so far as true No. 1 targets. Even if you don’t factor in the three 2017 rookies that haven’t been given a fair shot to develop, the returns have been collectively very poor.

We are quick to say that teams should wait on taking running backs but perhaps the truth is it’s better to wait on receivers. With the 2018 crop of receivers lacking premier talent at the top, it will be interesting to see how things unfold in April.

Some have cooled on Texas OT Connor Williams

There has been some negative buzz recently around Williams and that he played poorly this season in comparison to his 2015 and 2016 tape.  (Click on this tweet and read the replies to learn more)

I wonder if media scouts have Connor Williams OT Texas too high? Good player but not a slam dunk as I am studying these games.

While I respect many of the analysts who replied in that thread and enjoy learning from several of them, don’t count me in the anti-Williams camp. I recognize he isn’t overly long and needs refinement with his footwork but he’s a firm first round talent for me.

Williams nimble feet, ability to mirror pass rusher and excellent play strength project him to a left tackle role at the next level. Capable of excelling in both power-gap and zone blocking run concepts, Williams is a scheme-transcendent player. Williams does need to work on some technical issues with his hands and body control but he has the upside to be a plug and play left tackle in the NFL. A team that needs a blindside protector would be well-served to invest in Williams. At a minimum, Williams has immense potential at guard.

Big test ahead for Mason Rudolph

I’ll be in Orlando on Thursday to cover the Camping World Bowl between Oklahoma State and Virginia Tech and it’s one of the Bowl matchups I’m most excited for. OK State’s high-flying passing game is powered by seniors QB Mason Rudolph, WR James Washington and WR Marcel Ateman and the Hokies will arguably be the best defense they’ve faced in their career.

While one game does not define a career, the Hokies defense is loaded with NFL talent and an aggressive scheme under the direction of Bud Foster. Senior cornerbacks Greg Stroman and Brandon Facyson are Sunday players that will provide a considerable challenge for Rudolph, Ateman and Washington.

Rudolph has faced criticism for how he reacts when pressured and the Hokies will certainly bring the heat on Thursday. I’ll also be curious as to which NFL personnel is in the press box with me. Stay tuned.

By the time next week’s edition of 6-pack Thursday is published, the CFB playoff games will have come and gone so I wanted to go on record with my picks.

Give me Georgia over Oklahoma. In a matchup of premier offense vs premier defense, give me Georgia and its defense. While Oklahoma fields Baker Mayfield who is the most outstanding offensive playmaker in football, Georgia’s stout defense and physical rushing attack will be too much for the Sooners. Georgia 24, Oklahoma 17.

I like Alabama (not confidently) to knock off No. 1 Clemson. I think the biggest difference in this year’s game when compared to the previous two is that they square off in the first round of the playoffs and not the National Championship. The extra time to prepare favors Nick Saban and the Crimson Tide. If there was only one week to prepare, I’d feel good about Clemson’s chances but that’s not the case this time. Alabama 23, Clemson 20.

If you’re still thirsty after this 6-pack, catch up on others you may have missed.

Continue Reading
You may also like…
Related Topics:Featured, NFL Draft