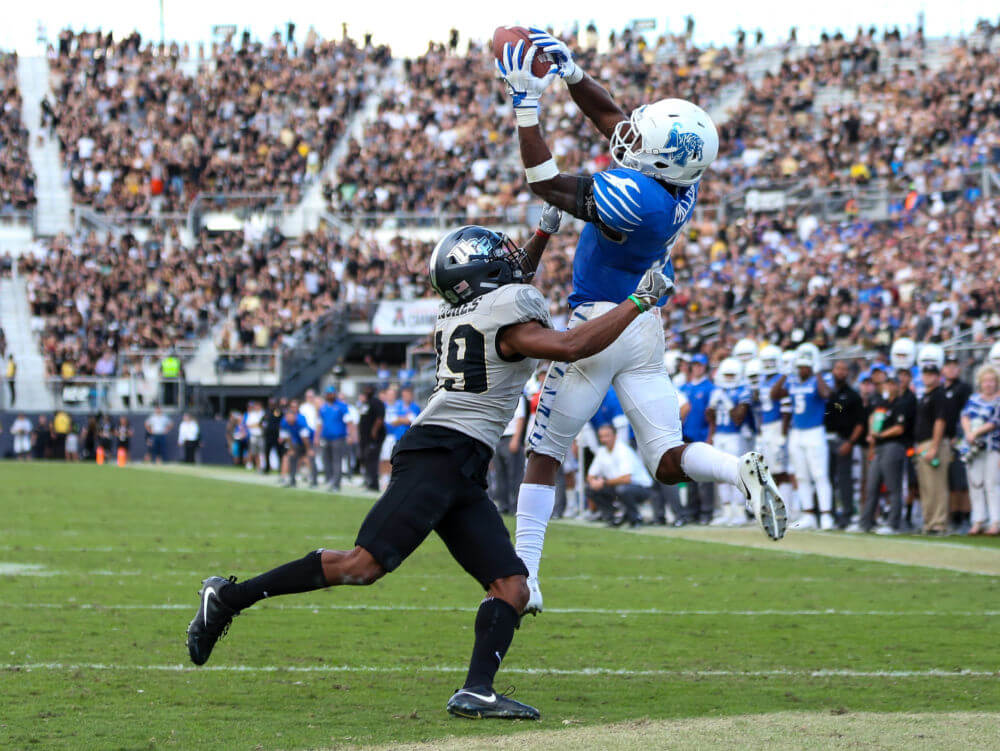 You’ve probably heard it said often over the past few months, but don’t expect the 2018 NFL Draft to boast a lot of elite game-changers at wide receiver. It’s a weak class without much high-end talent or a clear-cut no. 1, but for teams looking for complementary receivers, they should be able to find such targets on day two.

One of the few exceptions to the state of the class is Memphis’ Anthony Miller, a receiver who might not project as your typical no. 1 receiver, but in the right offense could be the key cog for a team’s passing attack. Many have dismissed Miller because he lacks elite size (5-11, 201) and length (31 5/8 arms) of a prototype top target, but I think a quick look around the league should tell us that the game has changed and there is plenty of room in today’s wide open NFL attacks for a player with Miller’s skill set to thrive.

For NFL teams that love to spread the field and line their receivers up in various spots to test a defense in multiple ways, Miller is the guy. His releases and acceleration off the line of scrimmage are terrific, and he’s commonly able to beat press coverage despite not being the biggest pass catcher.

This play ?The release is incredible, then the adjustment to make the catch on a poorly throw ball. Breaks a tackle, makes another miss. Anthony Miller is very good pic.twitter.com/rzU8SoVKlw

Press alignment from the corner, but the release by Miller is just otherworldly, forcing the corner to open to the boundary and then speed turn to recover the lost ground, which he fails to do. That’s advanced work off the line of scrimmage by Miller, whose lack of size is alleviated because his footwork and burst are so elite.

Then of course, there is the creativity and open-field elusiveness after the catch. Miller isn’t going to blow through tacklers, but his vision and slipperiness as a runner are effective, and he’s consistently aware of where the sticks are and shows tremendous fight to reach them.

For whatever reason Miller isn’t mentioned among the top deep threats in the class, when the tape showed a player that constantly got open deep and made tremendous tracking adjustments to the ball. Whether outside or in the slot, Miller stacked corners quickly with efficient footwork, and then used his burst to separate with the ball in the air. Watch the way his route path takes him away from the safety to open a bigger throwing window for his quarterback. Strong attention to detail.

That vertical separation is a staple of Miller’s tape. He might not be a 4.3 guy, but manipulative route fakes and an uncanny ability to vary stride length before blowing by his opponent allows him to constantly work free over the top. Elite vertical push off the line of scrimmage, gets his feet, hips and head to the field as if he’s running and in-breaking pattern and then in a burst he’s gone, with five yards of separation from his opponent. Ball is slightly underthrown and it makes no difference because the separation is so significant.

The more I scout wide receivers, the more I’m convinced the position is less about size and length and more about getting open at the line of scrimmage, getting open in the pattern and finishing at the catch point. Receivers who can’t do those things consistently probably aren’t very good.

Miller does the first two things at a high level, and the third well enough that he’ll be one of my top receivers in the class. It’s true that Miller does body catch at times, but that only bothers me in situations where defenders are working back through him to the ball. He needs to do a better job of extending to get his hands on the ball before the defender can break and contest the catch point, or dislodge his body from the ball with a big hit.

Miller does have the body control and high-point ability to go up and attack the ball in the air however, and he does it often enough that you feel ok with a few missed opportunities here and there, especially for a guy who creates so much separation that he won’t often find himself in a ton of contested spots. Here he has to work back through consensus top 50 pick Mike Hughes for a poorly-placed back shoulder throw, showing his concentration and flexibility in the air.

Mike Hughes can get some too pic.twitter.com/8bfy12e56L

Miller makes good adjustments on the football in the air, but is understandably limited by his radius and lack of elite length to an extent. I don’t think he’ll ever be a contested catch point dominator, but given his other skills, I also don’t think it’s a situation he’ll find himself in often.

The icing on the cake of Miller’s evaluation is that he is probably the best blocking wide receiver in the class. Yes, his listed size may not be an indicator of such prowess, but Miller is insanely strong, sporting a stacked frame that put up 22 reps of 225 pounds on the bench press at the Combine. He attacks corners with an intent to destroy them, and consistently is a positive contributor to the run and short passing game as a result.

This is every game with Miller. Takes blocking so personally pic.twitter.com/NQxsT8bI97

A fanatical effort on every snap, the Anthony Miller story. pic.twitter.com/RRCNvH0tST

Some prospects just display the necessary edge, confidence and refinement in all that they do on the field, which makes it much easier to project them to great things in the NFL. Miller offers those traits as well as impressive athleticism, body control and post-catch ability, as well as the ability to play inside or outside for an offense. For reasons that are inexplicable to me, it sounds like Miller has a better chance of going 50-100 in the draft than 1-50, and if that indeed is the case, some lucky team is going to fall into perhaps the top receiver in a class that doesn’t offer many of them.

Jon Ledyard has been writing about the NFL draft for several years now, and is thrilled to be bringing creative content and unique analysis to NDT Scouting. He lives with his wife Brittany and four-month old daughter Caylee in mid-western Pennsylvania. Jon is also the host of the Locked on NFL Draft and Breaking the Plane podcasts, while covering the Steelers for scout.com. The Office, LOST, weightlifting, ultimate frisbee, grilling, Duke basketball, and all Pittsburgh pro sports teams are his greatest passions.

This site uses Akismet to reduce spam. Learn how your comment data is processed.