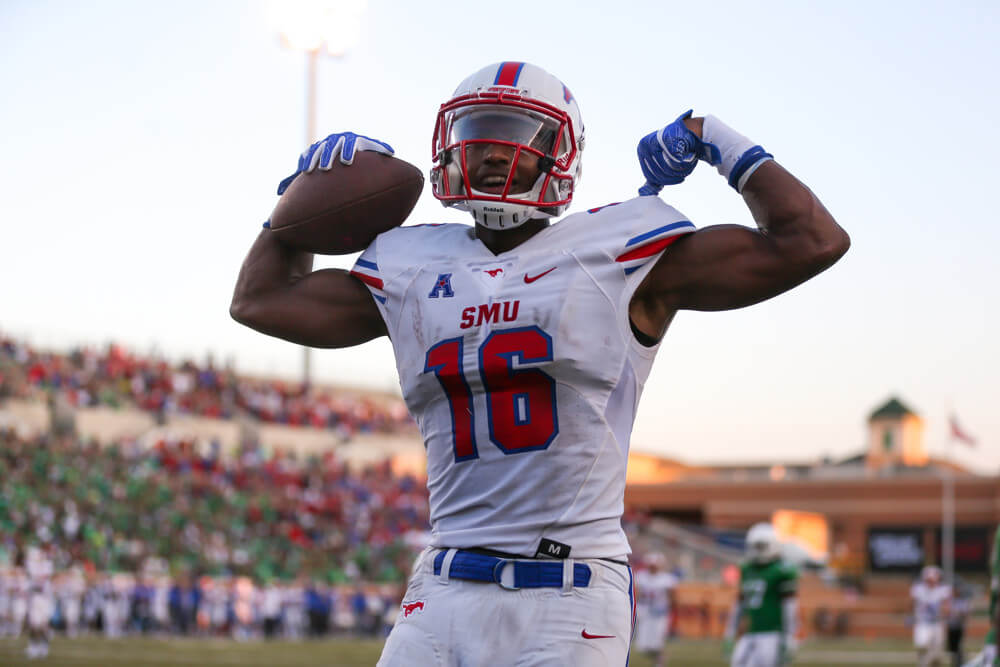 Get used to hearing me beat the drum about another non-Power Five WR prospect. I fell hard for Corey Davis and his four years of dominating film while at Western Michigan when I profiled him last winter for the NFL Draft. Davis was ultimately selected with the 5th overall selection by the Tennessee Titans this spring and is poised to add a new layer to the Titans’ passing attack.

If you’re like me and liked Corey Davis, you’re going to love Courtland Sutton. The Southern Methodist WR is a listed 6’4, 215 lbs; but in all likelihood is much closer to Davis’ 6027 (six feet, two and 7/8ths inches) from the 2017 NFL Combine. No matter. Sutton, like Davis, plays with a “my ball” mentality when addressing the football in the air. He illustrates the same subtle work to come back to the football. He knows how to use his size and strength both at the catch point and in the open field in the same way Davis did in college as well.

Ball skills and challenging the football in the air is a staple of both Davis and Sutton’s game at the college level. Here’s comparison:

Sutton is seamless in his transition into the boundary and cleanly receives the ball with good body control. Here’s a play from Corey Davis last year that illustrates a lot of the same plus qualities.

"Not physical at the catch point", they say. "No outstanding qualities", they say. pic.twitter.com/LxRIpPL7zT

From an angular standpoint these two throws are a bit off, but the physical traits required for each are equivalent to great body control, hand eye coordination and reaction time to flash late and address the ball away from a present defender.

Another area where the two players strike me as similar is their ability to use their frame to protect the ball prior to the catch. We’ll again inspect a present example from Sutton and a previous example from Davis.

Who does this remind you of? pic.twitter.com/1VRXPL3XIW

To answer my own question, he reminds me of Davis; especially when you’re watching how he wins on the boundary working against a physical defender.

Corey Davis using size against a Power 5 opponent to box out the ball because false narratives are #fun and this a double header. pic.twitter.com/w9xDJfIISc

What is significant about both plays. Note the eyes. Both receivers stay keyed on the football while still using muscle to work into the optimal position to challenge the football. This visual disconnect between applying force and seeing the recipient of that force is both difficult from a mental standpoint but also requires a good deal of functional strength. Both Davis and Courtland Sutton showcase that here.

Any time you have a receiver that logs over 6’2, it’s going to be noted how that player produces in the red zone. With space at a minimum, the ability to “play big” is essential.

Courtland Sutton with an excellent reception in the red area. pic.twitter.com/PpFwkHH9uL

In all, I would consider Courtland Sutton very much worth the hype. This is not a group of eligible WRs that brings a lot of alpha potential at this juncture; but Sutton appears to be the exception. A Redshirt Junior, Sutton figures to be the offensive centerpiece for the Mustangs and is poised for a huge year.

Kyle Crabbs is the founder/Director of Scouting of NDT Scouting Services, a member of the Football Writers Association of America (FWAA) and the lead NFL Draft analyst for the FanRag Sports Network.

2018 TCU Horned Frogs prospect primer
Crabbs | What TE Mark Andrews brings to the table
To Top
Notice: We use cookies to ensure that we give you the best experience on our website. By closing this banner, scrolling this page, clicking a link or continuing to browse otherwise, you agree to the use of cookies. If you want to know more or withdraw your consent to all or some of the cookies, please refer to the cookie policy.OkRead more