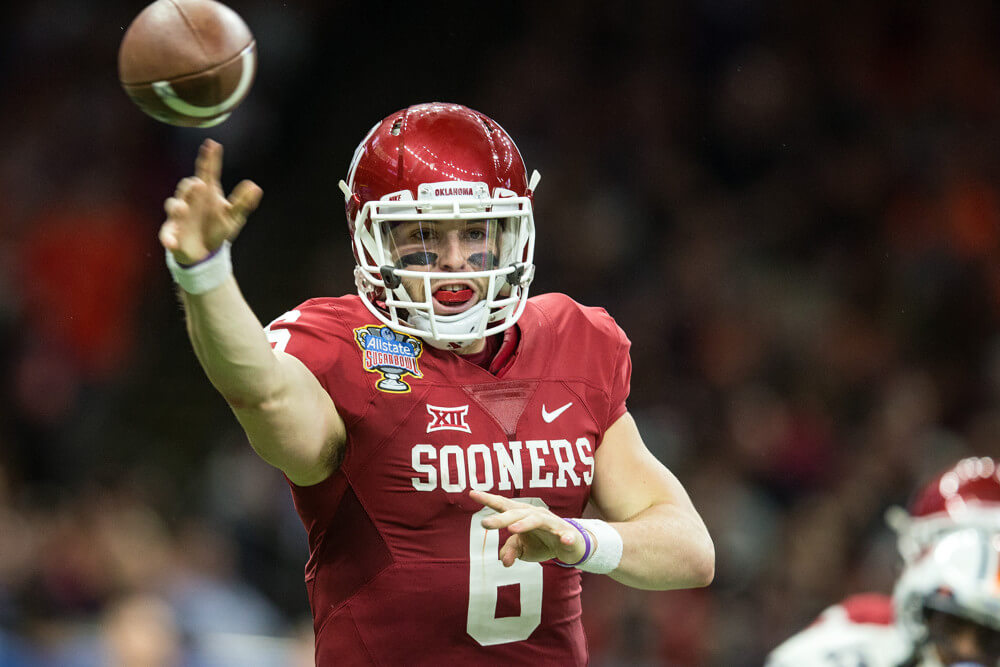 We’re still early in the season, but the luxury of NDT Scouting’s approach mirroring that of NFL franchises is I’ve already had the opportunity to set eyes on over 150 players eligible for the 2018 NFL Draft. There’s tons of information yet to be collected, whether that’s from a game or from athletic testing; but when one is able to see a player’s trajectory, as we are. I do feel comfortable with offering some initial thoughts on each positional group.

Just remember, these initial rankings are just that: initial. I would expect once the season is over and my methodology is fully implemented, there will be some discrepancies. But until then, allow this to establish my expectation of the class.

The top tier of this group has been widely debated for quite a while. I wouldn’t say there’s any earth-shattering developments from any of the top passers to this point. Darnold was my top QB entering the fall, and although he’s played loose with ball security, he’s the reason the Trojans are sitting at 3-0 at this point.

Lamar Jackson has shown promise and development in terms of his throwing fundamentals and field vision, which gives him a greater ceiling than anyone in the class based on raw ability. Josh Rosen is a bit of a polarizing prospect. His aggression and ‘push the ball’ mentality is going to get him in trouble with some in the Draft-sphere but I do believe he’s a franchise QB caliber prospect.

Baker Mayfield has been the biggest beneficiary of the early season. His play against Ohio State, especially after losing TE Mark Andrews early on, was tremendous. Mayfield continues to show he can operate his offense efficiently; but his best work will always be when he has to freelance.

I’m starting to get a bit skiddish with Mason Rudolph in relation to how he throws the ball once he’s forced off his spot. Rudolph can find big plays in the passing game, but when he’s forced to avoid rushers his accuracy wanes significantly. There are some top traits here, but Rudolph’s patience and footwork do need to get better.

There’s fewer names at the top of the running back group than their quarterback contemporaries. But the status of Barkley and Guice will be hotly contested all the way up until the actual draft (provided they both declare). I consider the two at this point to be 1A and 1B; they’re both tremendous talents with impressive gifts.

I’m sure there will be some marginal difference between the two after running them through my system, but your favorite team simply cannot go wrong with either one.

The Nick Chubb redemption tour is well underway, with Chubb offering more production to this point in the season and looking more like his old self. He’s already halfway to last year’s touchdown total and is averaging over 1.5 extra yards per carry. Barring any lingering health issues, Chubb will be back into the fray as a top back.

I knew I liked Ronald Jones II entering the season, but his play has been excellent. He’s aggressive and shows great pad level/balance when taking on would be tacklers. The same could be said for John Kelly, a first year starter for the Tennessee Volunteers. The Vols have struggled to keep the ball moving with consistency, unless it’s Kelly doing the work. He’s been one of the quickest risers on my radar this year.

I think you’ll find a similar valuation for Courtland Sutton this winter as the NFL found in Corey Davis last year; they’re a comparable size/athleticism profile and Sutton has a likable aggression when addressing the ball in the air.

Ridley is an older player, but I wouldn’t find that too concerning if I were considering selecting him. He’s a loose, free mover and the more you watch him the more you appreciate his open field skills; even if he isn’t getting targeted consistently. Meanwhile, production isn’t a problem for Washington WR Dante Pettis, who has emerged this year with the absence of Bengals rookie John Ross.

Christian Kirk may be the best true athlete out of this group. He’s explosive, sudden and well balanced with the ball. But is he a prime time wide receiver? I’m still not totally convinced his technical skills are there yet.

It’s been awesome seeing Simmie Cobbs back “Moss-ing” defensive backs at Ohio State and Virginia to start the year. After missing 2016 with injury, Cobbs has the size and contested catch ability to be a big time mis-match on the boundary.

The theme here? Move/flex tight ends hold a lot of value in today’s NFL. That’s how players like Evan Engram, Gerald Everett and Jonnu Smith get targeted early on. With the league embracing better athletes to play the receiving TE role, my eyes see a lot of work with in that niche of the position.

Mike Gesicki has been a big play machine going back to 2016. His vertical ball skills are very strong and he’s got length with enough long speed to really stress teams up the middle of the field.

Dallas Goedert isn’t on the same torrid pace as he was last year, but pay no mind. His 2016 tape shows you all of the physical ability you need to see, he’s a very strong receiver. I don’t even necessarily need to see Goedert develop as an inline player; he’s got some Travis Kelce qualities as a receiver and that’s good enough for me at this point. Mark Andrews is probably the most well rounded of this group of tight ends, he’s pretty competent working from an inline position; but like the rest of this group he’s got much more upside receiving the ball.

Adam Breneman may play as UMass, but remember this was once a high profile recruit who settled on Penn State before injuries pushed him into retirement. A year later, Breneman is an NFL player in waiting, provided his medicals check out.

If there’s a player with a more unique path to the NFL than Breneman, it’s Hayden Hurst, who was a minor league baseball player for two years before walking on with the Gamecocks. He’s an incredible natural athlete and although he needs to cleaning up technically, he’s got what it takes to beat LBs in space.

Williams just tore his meniscus, but his recovery timeline is up in the air. Regardless of his status, there’s no one in this class who can rival his blend of mobility, strength and recovery balance. Mike McGlinchey is much more of a technician than a natural athlete, and there’s some reason behind the concern about how well he’ll handle speed after his showing against Georgia. But it’s important to not over-correct either, ultimately McGlinchey plays the game well and is a starting caliber prospect.

Orlando Brown Jr has NFL bloodlines. It’s not every day that you find a player of his pure stature. Brown fits the mold as the lengthy tackle; who can protect the blind side even if he’s not super fleet of foot.

Okorafor is a high upside player, but he is more raw than the other names on this list. I love his anchor and natural strength. Martinas Rankin, on the other hand, is simply inconsistent. But look to see how Rankin performs in the SEC play this year, if he performs well he’ll firmly solidify his standing.

Nelson is in a league of his own. There’s few Guards worthy of this level of praise, but I see him as being worthy of a top 10 selection overall. Nelson has an impressive blend of technique, movement efficiency and overall strength. Add in a tenacious demeanor and this is someone capable of changing the tone you set up front.

The rest of the class? Meh. Smith is being tasked with playing Left Tackle for the Tigers this year, so I’ll hold more value in his 2016 film. Billy Price has recently shifted from Guard to Center, following in the footsteps of rookie Pat Elflein, who was a favorite of mine last season (top 20 overall valuation). Ragnow is a true Center but he plays full tilt; he gets movement in the run game like a power guard.

I wanted to give a shout-out to Will Hernandez from UTEP, for the sole reason that I haven’t had the opportunity to watch him just yet but I know he’s very highly regarded by some of my colleagues. He’s one I’m excited to check out.

Kyle Crabbs is the founder/Director of Scouting of NDT Scouting Services, a member of the Football Writers Association of America (FWAA) and the lead NFL Draft analyst for the FanRag Sports Network.